You Are Here: Home » Dairy » STRONG BRANDED GROWTH IN A VOLATILE MARKET

Arla delivered a solid business performance throughout 2016 and made a strong start to the delivery of its strategy, Good Growth 2020, despite highly volatile milk markets. While revenue declined due to the global price environment, Arla continued to improve the quality of its sales by moving more milk from bulk to brands, and Arla’s net profit grew 20.7 per cent to EUR 356 million.

In the second half of the year Arla introduced increases in its prepaid milk price to farmers by nearly 30 per cent and expects annual revenue and performance price to improve in 2017.

In a year with extreme volatility in raw milk production and farm gate prices, Arla delivered financial results above its targets on most measures, with net profit at 3.6 per cent of sales, a strategic branded volume driven revenue growth of 5.2 per cent and a growth in brand share to 44.5 per cent. Leverage was 2.4.

During the first eight months of 2016, the dairy industry was characterised by low global milk prices due to a period with an over-supply of milk, particularly in Europe. European milk supply then declined significantly in the second half of the year, supporting a significant milk price rally.

In the last four months of 2016 Arla delivered four consecutive increases in the on-account milk price – representing close to a 30 per cent increase. This is the most rapid increase in the prepaid milk price that Arla has ever recorded, and this very positive development has continued for the first months of 2017, delivering a total increase of over 40 percent in the milk price to Arla’s farmer owners.

“Our 2020 strategy has guided our business in 2016 as we sought to mitigate the impact of the extremely volatile market in Europe. We are more focused than ever on brand and category development as well as our geographic markets, and we succeeded in building our market shares in many of our strategic growth regions outside the EU,” says Arla CEO Peder Tuborgh.

“The year was very tough for our farmer-owners, as they were not immune to the sustained period of low milk prices in the global dairy industry for the last two and a half years. Consequently, the multiple increases we were able to deliver in Arla’s prepaid milk price during the last four months of the year were much-needed,” says Peder Tuborgh.

Revenue affected by global price decline
Group revenue decreased by 6.8 per cent to EUR 9.57 billion (compared to EUR 10.26 billion in 2015). This is a direct result of lower sales prices in the global market due to high milk volumes in Europe in the first half of 2016 as well as unfavourable exchange rates.

Performing above peers
Net profit of the Arla Group in 2016 grew 20.7 per cent to EUR 356 million, of which the profit share of Arla Foods amba is EUR 347 million, corresponding to 3.6 per cent of Group revenue.

The 2016 performance price decreased 8.3 per cent to 30.9 EUR-cent/kg, compared to 33.7 EUR-cent/kg in 2015. The performance price reflects the ability of the company in any given market situation to add value to its owners’ milk through innovation, brands, cost-saving programs, global growth, and other strategic and operational efforts.

“We generated an average of five per cent more value per kg of owner milk than the average of our peers in 2016, which reflects our ability to pay a competitive milk price in the market as well as our efforts to mitigate the effects of a tough global market for our owners. While this does not change the fact that 2016 was an extremely challenging year for our farmers, it shows that we are delivering above the majority of peers in the market,” says Arla CFO Natalie Knight.

Arla’s peer group index is based on publicly available financial key figures from comparable competitors in Northern European markets, representing 80 per cent of all milk produced in the region.

“Our brands performed well, exceeding our overall target range of four to five per cent by achieving a strategic branded volume driven revenue growth of 5.2 per cent. Puck® is the leading performer, driven by exceptional performance in the Middle East and North Africa, where the brand now holds the number one position in jar cheese across the region. The Arla® brand showed strong growth due to increased investment in innovative and specialized product ranges such as Arla Natural®, Arla Lactofree®, skyr and other high protein products, as well as infant nutritional formula such as Arla Baby & Me®,” says Peder Tuborgh.

Strategic growth markets performing well
Europe is Arla’s core commercial zone, contributing to 66 per cent of Group revenue in 2016 with a volume driven revenue growth of 1.3 per cent.

Arla’s strategic growth markets outside the EU achieved the largest volume driven revenue growth rate to date of 9.5 per cent in 2016 – primarily due to strong performance in China and Southeast Asia (up 31.2 per cent) and Sub-Saharan Africa (up 15.8 per cent).

“Our highest growth rates right now are in China and Southeast Asia, where our aim is to quadruple revenue from retail and foodservice by 2020 compared to 2015. We are on track to deliver this strategic target with strong positions in child nutrition, foodservice and even the growing cheese category. Our efforts to engage consumers via digital and e-commerce sales channels have contributed to this growth,” says Natalie Knight.

Arla Foods Ingredients, a 100 per cent owned Arla Foods subsidiary and a global leader in whey based ingredients used in a wide range of food categories, reported a 5 per cent increase in revenue to EUR 545 million in 2016 due an improved product mix and growing sales volumes.

Cumulative costs continue to decline
Keeping strict control on cost and rigorously optimising processes is critical to Arla’s success and competitive positioning, and in 2016 the company displayed excellent cost discipline.

“We have maintained a tight grip on costs across the Group, reducing our total operational cost in 2016 by 1.4 per cent excluding the cost of raw milk. A year ago we kicked off our new efficiency program with the target to reduce our cumulative costs by EUR 400 million by 2020. In 2016 that has resulted in a EUR 100 million cost saving during the program’s first year, and we will continue to deliver on this agenda in 2017,” says Natalie Knight.

Expectations for 2017
In 2017, Arla expects Group revenue to grow significantly due to a continued growth in the company’s branded business as well as higher prices in the market globally. Arla targets a net profit share for 2017 in the range of 2.8 to 3.2 as the company continues to focus on paying out the largest possible share of profit via the prepaid milk price to farmer-owners.

Arla expects 2017 to be another year of improvement in financial leverage within the stated long-term target range of 2.8 to 3.4.

“We are confident that the improved quality of our business as well as our Good Growth 2020 strategy put us in a favourable position and will ensure that we are ready to capture the full potential of the market as it continues to evolve and globalise in 2017. You will see Arla take an even stronger position in the market as an innovative dairy company that provides natural and healthy food to consumers and customers worldwide,” says Peder Tuborgh.

Arla Foods will publish its annual report on March 2nd after the company’s Board of Representatives has decided how to appropriate the profits. 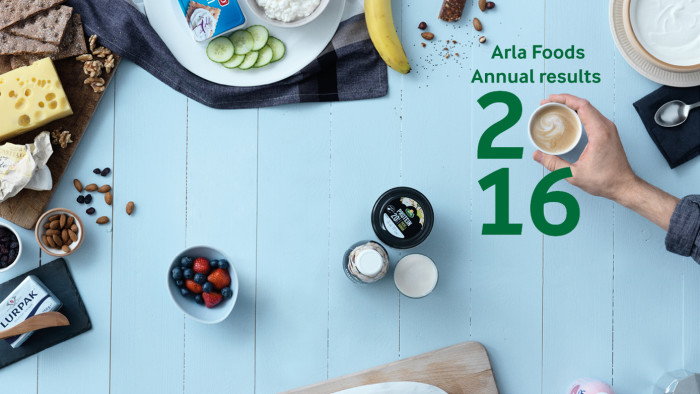