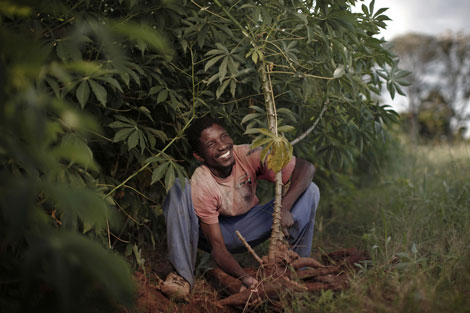 SABMiller plc (SAB.L) announces the launch of a cassava beer in Ghana. The beer will be brewed by SABMiller’s local subsidiary, Accra Brewery Limited (ABL), under the brand name ‘Eagle’. The launch builds on the success of the world’s first commercially-made cassava beer, Impala, which SABMiller unveiled in Mozambique 18 months ago.

Prior to Impala’s launch in Mozambique, cassava had never been used to brew beer on a commercial scale because of the logistical challenge of collecting the roots from smallholder farmers who are widely dispersed, along with its rapid deterioration immediately after harvesting. Cassava is a reliable source of starch across most of Africa, but it starts to degrade almost immediately after it is harvested, which, together with its high water content, makes it unsuitable for transporting over long distances.

Mark Bowman, Managing Director of SABMiller Africa, said: “Part of our strategy across Africa is to make high quality beer which is affordable for low-income consumers while simultaneously creating opportunities for smallholder farmers in our markets. The launch of Eagle in Ghana ticks both these boxes.

“Eagle is aimed at attracting low-income consumers away from illicit alcohol. This is a virtuous circle: smallholder cassava farmers have a guaranteed market for their crop, which is then used to make consistently high quality, affordable beer for consumers; and the government realises increased revenues as people trade up into formal, taxable alcohol consumption.”

Accra Brewery has partnered with DADTCO (Dutch Agricultural Development and Trading Company) Cassava Processing Ghana Limited, which has designed a mobile processing unit (AMPU) that travels to the cassava growing regions and processes the root in situ, preserving the integrity of the starch. SABMiller already works with DADTCO in Mozambique where the same technology is used. This initiative is part of SABMiller’s ‘Farming Better Futures’ programme. Within the first year, ABL expects to source the cassava from as many as 1,500 smallholder farmers.

Much of the cassava in Ghana is grown by subsistence farmers and there is an estimated 40% surplus each year partly because there is little opportunity for farmers to sell the produce in commercial markets. The launch of Eagle will provide an opportunity to turn locally grown cassava into a cash crop, allowing farmers to generate income whilst continuing to feed their families and, at the same time, reducing the crop’s surplus.

Eagle will be sold in 375ml bottles at a price point equal to 70% of mainstream lager. This is made possible by a reduced excise rate agreed with the Ghanaian government in recognition of the use of locally-sourced commodities and the long-term contribution that Eagle is expected to make to agricultural and economic development in the country.