You Are Here: Home » Beverages » SABMiller grows in the UK and taps into Pilsner Urquell Tank Beer 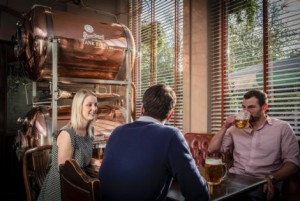 SABMiller announces that its UK subsidiary, Miller Brands UK (MBUK), has grown domestic lager volume sales by five per cent in the six months to 30 September 2013. This growth was supported by the Pilsner Urquell brand which performed strongly during the period, growing by 17%, helped by rapidly accelerating sales of its unpasteurised tank beer following a trial launched in the summer. The continued strength of the Peroni Nastro Azzurro brand in the UK also contributed to MBUK’s performance and the business achieved record sales during the hot summer month of July. The business outperformed the UK beer market which was flat in volume terms over the half year.

The official opening event at the White Horse was the pub’s most successful brand launch ever.  Since then, the beer has remained in high demand with sales of Pilsner Urquell tripling after the introduction of this innovation.

Delivered within 24 hours by a special tanker directly from the brewery in Pilsen to the UK, the beer is pumped into specially crafted copper tanks from the Czech Republic which are installed and on display in the pub. Each tank contains 880 pints and they are refilled with fresh Pilsner Urquell every week. The tanks ensure that the beer is kept at the right temperature and in perfect condition until the time it is poured into the glass, ensuring the very best taste, quality and a fuller, rounder malt body. This is the authentic way the beer is enjoyed by beer lovers across the Czech Republic and following its popularity in the UK, MBUK will install further Pilsner Urquell tanks in key London locations during the second half of fiscal year 2014.

Gary Haigh, managing director, Miller Brands UK, said:
“The British beer drinker is one of the world’s most cosmopolitan which makes this an ideal market in which to introduce international beers served in the authentic way. The early success of unpasteurised Pilsner Urquell in the UK underpins our belief that consumers are looking for authenticity and differentiation in the beers they drink. By partnering with pubs and other on-premise outlets, brewers have a central role to play in reinvigorating pub culture in the UK and getting consumers passionate about beer again. The expansion of Pilsner Urquell tank beer in the UK marks a real innovation in the consumer experience and enjoyment of beer in this country.”