You Are Here: Home » News » Oil-free emulsions for low-fat foods 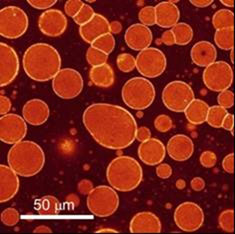 Emulsions consisting of water-soluble ingredients instead of oil and water. That has become possible based on technology further developed by NIZO. It paves the way to low-fat or fat-free products with a creamy mouth feel.

In the context of the European cooperation project SOMATAI (Soft Matter At Aqueous  Interfaces) with twelve academic and industrial partners, Hans Tromp, NIZO food research expert and senior lecturer in applied colloid chemistry at the Dutch University of Utrecht, has applied protein-polysaccharide combinations that create the same texture as oil-containing emulsions. Finding the right food-grade emulsifiers will enable their application in foods.

Emulsified oil, in products  such as mayonnaise, sauces and margarine, owe their specific mouth feel to destabilisation of the oil globules on the oral surface, resulting in a film of oil that covers the tongue. Human perception is set to appreciate this experience of fattiness. However, now that oil, fat and other high-calorie ingredients have become so amply available, they have come to represent a health risk. Emulsions of water-soluble ingredients offer the possibility to simulate the experience of fat with low-caloric substitutes. Water-water emulsions have certain characteristics that make them suitable for use as substitutes for oil-water emulsions. By applying such emulsions, products may be created that contain less fat, but nevertheless generate a creamy mouth feel.

Essential in the case of the new emulsions is the use of the right emulsifiers. In water-water emulsions, the surface tension at the interface is many times smaller than that in oil-water emulsions. The surface tension is the factor responsible for instability, and hence the mouth feel of emulsions. During consumption, an emulsion must destabilise to form a film of oil or fat covering part of the surface of the tongue. This creates the experience of creaminess that consumers tend to appreciate. So emulsifiers serve not only as stabilisers, but also as means for manipulating stability.

Several food-grade water-water emulsions have meanwhile been realised. “An emulsion consisting of gelatin and a polysaccharide whose gelatin-rich emulsion droplets have been gelled to make them stable could be used to replace a portion or all of the fat or oil globules in emulsions such as mayonnaise, cream or dressings,” explains Tromp.  “The next step is to test this in foods. And there is more that we intend to investigate, for example the use of such an emulsion as a template for the growth of microbes or as a platform for controlled release. This makes it a very promising technique.”

A water-water emulsion stabilised by a hydrocolloid, visible as a bright ring around the droplets.