Arla looks to expand its production globally and make it more eco-friendly by investing 2.2 billion DKK in 10 of its dairy sites in 2014. The focus will be on production of profitable export products for the company’s strategic growth markets outside the EU. 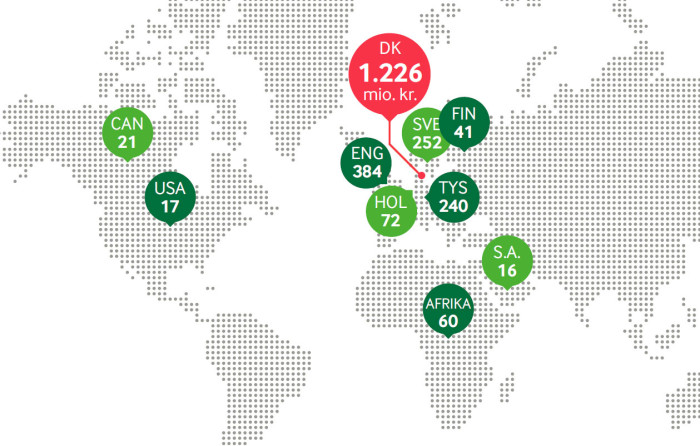 With an ambition to double its exports of European dairy products to growth markets outside the EU by 2017, Arla has announced a new investment plan for the coming year. Recently approved by the board of directors, the plan contains investments of up to 2.2 billion DKK.

The money will go into new and ongoing dairy expansions and into projects that will help make Arla’s production even more climate-friendly.

“This year we are increasing our investments to dairy sites that contribute to our export out of Europe. Our sales on the growth markets outside the EU are growing at a fast pace, and we must prepare ourselves to meet the rapidly growing demand in years to come. In Arla we are determined to create good growth, and we are therefore also investing more than 125 million DKK in projects that will make our production chain even more climate-friendly,” says Vice-CEO in Arla Foods, Povl Krogsgaard.

In total, 750 million DKK will be invested in production for Arla’s strategic growth markets outside the EU – Russia, China, the Middle East & Africa – which is a third of this year’s production investments (compared to 466 million DKK in 2013).

Lactose expansion
Arla’s production investments in 2014 make up nearly three per cent of the expected turnover of approximately 79 billion DKK, which is also the ambition in Arla’s Strategy 2017. The goal is to increase profitability in Arla’s business and thereby create a higher earning for Arla’s cooperative members long-term.

The largest single investment in 2014 is approximately 530 million DKK for the ongoing construction of a new lactose production site near Nr. Vium in Denmark. The new site will produce value-added lactose ingredients based on whey from Arla’s nearby cheese production. These ingredients will be used for child nutrition products and other categories and sold to the food industry globally by Arla’s subsidiary Arla Foods Ingredients.

“The new lactose site is a very important investment for us. One of our most profitable business areas is whey-based ingredients for the global food industry, and that business must be doubled by 2017. The new lactose site will produce high-quality ingredients for child nutrition products that are in high demand especially in Asia. It will contribute to a profitable export and contribute positively to the milk price of our cooperative members,” says Povl Krogsgaard.

Other examples of significant investments in 2014 are:

Investing in climate improvements
More than 125 million DKK will be spent on making Arla’s production more environmentally friendly. Arla currently has 67 dairy sites around the world, and they are all working to reduce their carbon emission.

“The target set in our climate strategy in Arla is to reduce our overall CO2 emission by 25 per cent by 2020. Our production plays a key role in the efforts to reach that target, and therefore we are investing in new state-of-the-art heating pumps and water-saving equipment. This will reduce our energy consumption and our emission of CO2,” says Povl Krogsgaard.

Arla’s investments in environmental improvements are expected to reduce the Group’s overall energy consumption in production by 2.3 per cent in 2014, which is equivalent to a reduction of 62,115 MWh (or the same as the annual energy consumption of approximately 13,800 standard households).

Key elements of the 2014 investment plan:

• Arla continues to significantly increase its exports to the strategic growth markets of Russia, China, the Middle East and Africa up to and during 2017. Arla is therefore investing in new dairy expansions to increase the volume of products available for export.

• Arla’s aim is to double the revenue of its subsidiary Arla Foods Ingredients, which sells whey proteins, lactose and milk-based ingredients to the global food industry to more than DKK 5 billion in 2017. Therefore Arla is investing in a new lactose manufacturing facility.

• Arla’s climate strategy aims to achieve a reduction in total Group CO2 emissions by 25 per cent before 2020. Therefore Arla is investing in projects that will deliver environmental improvements at individual dairies, in order to reduce energy consumption.