You Are Here: Home » Bakery & Confectionary » Fletchers Group on a roll with new £7M production facility

Fletchers Group on a roll with new £7M production facility

Fletchers Group of Bakeries has opened a brand new £7m production facility at its Sheffield operations following a multi-million pound land-sale to Sainsbury’s.

The new facility will supply fresh and frozen, white, brown or seeded bread rolls to retail and food service customers and houses two production lines, a new cold store, a new despatch area. A  new site entrance and two new car parks for employees have also been created.  Technical standards throughout have been improved significantly in order to meet exacting customer standards.

The facility was opened by Gordon Maclean, 65, a recently retired Fletchers employee of 49 years, alongside the Rt. Hon. David Blunkett, MP for Sheffield Brightside and Hillsborough.

David Blunkett said: “Firstly, I am very proud to join Gordon in opening the new facility to commemorate Gordon’s 49 years’ service. I also hope that this state-of-the-art development can be seen as a sign of further economic recovery and jobs security for the Hillsborough area and the wider city region.”

Gordon Maclean, who started work in 1963 at the site, aged just 15 years, said: “I’ve seen plenty of change here over the years but this new plant is extraordinary when I think back to my early years in the bakery. 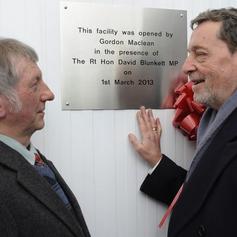 “Everything we produced then was despatched on wooden trays which you wouldn’t be able to use in a modern facility. We also made many more confectionery products, cakes and custards back then and most of it was hand-made, or at least hand-finished.

“I think it’s marvellous to see the factory investing in a new production facility after so many years. It was an honour for me to come back and open this new facility.”

Clegg Food Projects, which provides building and consultancy solutions for major food operations all over the country, was awarded the contract to engineer and install the Stamford facility.

Fletchers Group has seen its business revitalised under the current management, moving from a 2007-08 operating loss of almost £10m to an operating profit of £0.6m in the last financial year.

There are four businesses within the group. Fletchers Sheffield, LBD in Barnsley, Kara in Manchester and Grain D’Or in London. Sixty per cent of its turnover comes from the retail sector including  Tesco, Sainsbury’s, and Marks & Spencer.  Forty percent of its turnover is within the foodservice sector supplying schools, local authorities, fast food outlets, restaurants and bars.